Case Study: Just in Time (I Found You)

The Independent Oil network comprises approximately 170 sites whose underground petroleum storage systems (UPSS) are on average 23 years old. In most cases, the UPSS are single-wall steel tanks with rigid galvanised pipes which was the standard at their time of construction. The site at Cityside in inner Sydney is a typical example of what can go wrong, and is going wrong, at a small percentage of older service stations.

EMS commenced Fuel system monitoring at the Cityside site in March 2015. Although monthly analysis and reporting is the minimum government requirement, Independent Oil wisely selected weekly analysis and reporting for its network. Weekly analysis is just one of the additional benefits of EMS’s Enhanced Statistical Inventory Reconciliation (ESIR) analysis method. SIR is an accepted system for leak detection under the New South Wales (NSW) Protection of the Environment Operations (Underground Petroleum Storage Systems) Regulation in place since 2008. Similar requirements have been in place in Australia since 2004. EMS’s SIR software application ‘Greenscan’ uses sophisticated statistics to compare the raw data from deliveries, sales and tank levels on a daily basis as opposed to traditional SIR, which analyses data after the end of each month. 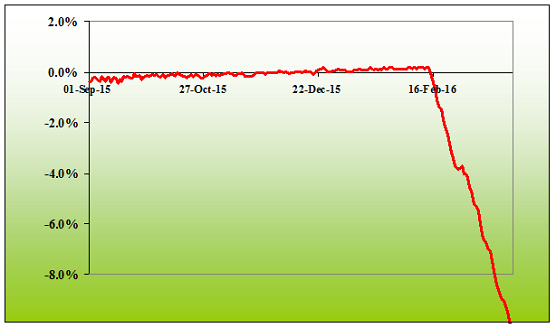 *Independent Oil and Cityside are fictitious names, but the companies they represent are real.

When the numbers do not add up, the analysis attempts to separate the sources of the differences before concluding the loss could be a leak. Until 16 February 2016, the numbers for Cityside’s UPSS did add up, then they literally went off the chart and fast!

By the end of the first week, Cityside’s measured accumulated ‘loss’ was equivalent to more than 40% of the tank’s capacity of 13,900 litres. However, this did not mean there was definitely a leak. The apparent loss could be due to procedural, maintenance or back office issues. The first step is to determine if there have been any changes at the site. In this case, it was identified that a new staff member had started in February. However as the large losses did not occur across all tanks, this factor was ruled out as a contributing factor. The site maintenance contractor was contacted and confirmed that no work had been carried out recently. The dipstick was checked and was found to be in good working order, and it was confirmed that daily inventory procedures were being followed correctly. All pumps were reconciling correctly.

The loss in the PULP system accelerated such that the estimated accumulated loss exceeded the tank’s capacity by 10 March. If this was a leak, already a lot of fuel had escaped into the ground. EMS and Independent Oil agreed that the next step should be to promptly and independently test the tanks and lines.

All of the site’s tanks were tested on 14 March, just over a month since the start of the loss trend. The PULP tank failed all three standard leak tests  – wet static, wet pressure and ullage – indicating that the tank shell was breached. Independent Oil decommissioned the tank on the advice of the testing company, and one of Cityside service station’s three ULP tanks was changed over to PULP.

Clearly, had Independent Oil not upgraded from the basic SIR analysis service to ESIR, the February data for Cityside would not have been analysed until at least two weeks later in March. It would then have been another month before the loss was confirmed. This hypothetical six-week delay translates into 83,400 litres of lost product valued at nearly $90,000. By selecting to upgrade the service level to ESIR across its network of fuel sites, Independent Oil has ensured that all issues – from simple procedural mistakes to serious problems like the leak in Cityside’s PULP system – will be addressed in a timely manner, greatly reducing its exposure to environmental risk.

In hindsight the magnitude and rate of change of the loss rate of this example might seem obvious however, this is not uncommon and often overlooked as simply poor practices resulting in poor data.

Whilst this story emphasises the benefit of more frequent SIR analysis, it also highlights another weakness, the time to organise contractors to perform various work, which contributes further delays, often days to weeks.

The moral of the story is time to action, whether it be identifying, resolving or confirming unacceptable fuel variances daily, more frequent SIR analysis or prompt action by contractors. Each contribute to delays that for a leaking fuel system results in further unacceptable environmental damage.